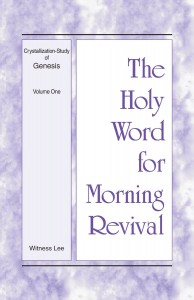 II. The separating of the waters by producing an expanse between them on the second day, signifying, spiritually, the dividing of the heavenly things from the earthly things through the work of the cross, is the fifth requirement for generating life—Gen. 1:6-8; Col. 3:1-3; Heb. 4:12

III. The appearing of the dry land is the sixth requirement for generating life; this took place on the third day, corresponding to the day of resurrection—Gen. 1:9-13; 1 Cor. 15:4

IV. The light -bearers appeared on the fourth day as the seventh requirement for generating life to produce the higher forms of life—Gen. 1:14-19

V. The living creatures in the water and in the air were generated on the fifth day—vv. 20-23

VI. The living creatures on the earth were generated on
the sixth day—Gen. 1:24-31

The first two chapters of Genesis appear to be a record of creation, but the underlying thought is completely a matter of life. This is why some people consider that chapter one and two are too simple, too brief a record of  creation. However, if we read the first chapter carefully and receive the light from the Holy Spirit, we might realize that God’s desire is to reveal life to us.

In Genesis 1:1, “In the beginning God created the heavens and the earth.”  This refers to the God’s original creation.  In Genesis 1:2a, “but  the earth became the waste and emptiness, the darkness was on the surface of the deep.”  According to the revelation of the whole Bible, this is the result of Satan’s rebellion and God’s judgement.  Praise the Lord!  From Genesis1:2b, God came in for having restoration  and further creation. From 1:2b through 1:3, there are three comings: the Spirit came, the word came and the light came. The Spirit, the word, and the light were the instruments used by God to generate life.

These three instruments were not only used for generating physical life but also for spiritual life. If we check with our own experience of being saved, first the Spirit broods over us. Then comes the speaking of God. Finally the speaking of God enlightens us within. In our Christian life, every day, especially every morning, we have to experience  these three comings again and again in order to generate more life in our whole being.

On the fourth day, God made some light-bearers, including the Sun, the Moon, and the stars.  These are lights which are stronger and more solid than the light on the first day. Life depends on the light. The higher the light, the higher the life. In order to produce the higher life, or in order to grow in life to a higher level, we really need more solid light. According to Bible, the sun signifies especially Christ Himself, the moon typifies the Church and the stars typifies Christ and the overcoming believers.  Therefore, in order to grow in life, we must contact Christ directly as our sun and our star, we also need to have normal church life as our moon, and we  have to fellowship with shining saints as our stars. By means of receiving these more solid lights from Christ, the church, and saints, we will grow in life which is portrayed in Genesis One from the plant life through  fish life, bird life, animal life and cattle life, unto the human life. The human life is the highest created life that can express God in His image and likeness and that can exercise dominion for God.

God’s intention that man would express God in His image and represent God with His dominion is not fulfilled in Adam as the first man, the old man, but in Christ as the second man, the new man, comprising Christ Himself and the church as His Body.  Furthermore, it is fully fulfilled in the overcoming believers in the millennium. Finally, it will ultimately be fulfilled in the New Jerusalem.